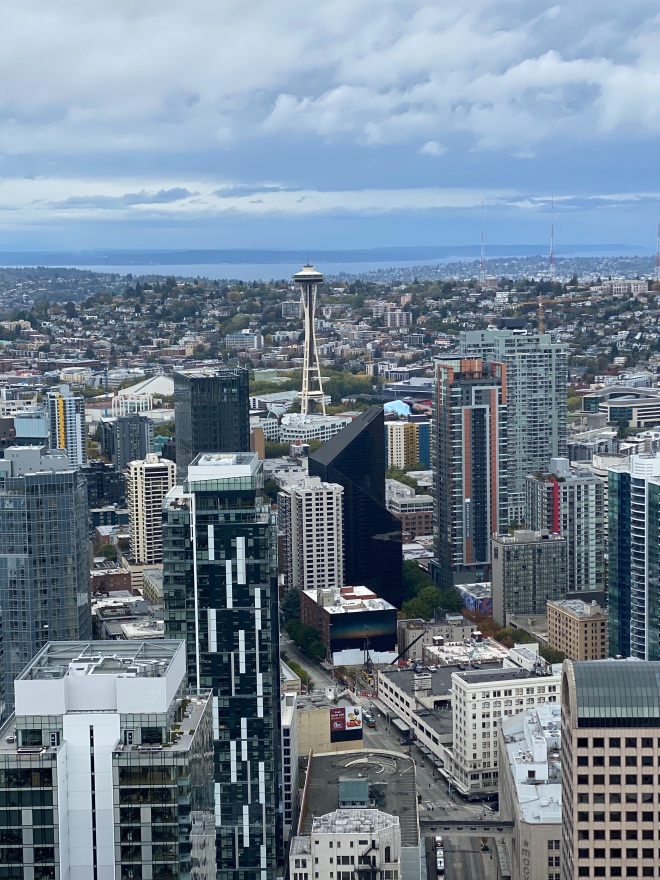 You might be thinking that I have selected a cheesy title, but during quarantine I went on a Meg Ryan and Julia Roberts binge, so it is fitting and I like it. Anyway, I did sleep a bit if you must know, but for those of you who know me, travel is not for sleeping and relaxing, but for adventuring as much as possible. You can sleep on the plane! In my usual fashion, I also met some awesome people and spent the time exploring the city with absolutely no agenda. Here is what I did with my 2.5 days in Seattle, during a global pandemic.

at the Green Tortoise Hostel right next to Pikes Place Market. The vibe of this place was pretty neat! Though small and grungy, it had a lot of character and good people. There was a common area, where I met several solo travelers, a kitchen where we had free rein, and a smoke room. Yes, an indoor room exclusively for smoking, which was more so a chill room where people talked for hours on end and lost track of time due to the lack of windows. I feel I should add that COVID precautions were in place. Rooms were not rented to full capacity and masks were required unless actively eating, drinking, or well, smoking in this case.

at a few different places, none of which were originally recommended to me. I had a list of places that my friends raved about, but with everything going on I ended up picking places at random, some good and some less than noteworthy. The good spots were Willmott’s Ghost and McMenamims Six Arms. Willmott’s was a chic restaurant that gave me all the feels! Located inside the Seattle Spheres, it offered floor to ceiling windows looking out onto beautiful greenery and the interior was complete with blush pink, mint and gold accents. Even the bathrooms in this place were picture worthy, and I could not resist taking a mediocre selfie, masked-up of course.

McMenamims Six Arms, on the other-hand, was a a cool pub in the Capitol Hill district that looked like it came right out a steam punk movie. The beer list was very long, the food was good, I mean I was drunk by the time I ordered a burger, but I remember commenting (or raving endlessly for about five minutes) on how incredible it was. Take that for whatever you think it is worth! My new friends and I posted up at this place for four of five hours laughing, telling stories, and slamming Tequila shots! It was a good time.

mostly walking around. No Uber’s, trains, or subways were taken during this trip, but rather a whole lot of walking. The best way to see a city is to walk around without a destination. Getting lost is when you oftentimes find the most unique places and have the best of times. My walking highlights included the Sculpture Garden, views of the incredible pier, architecture, and old urban buildings that offered a diverse artistic feel to this city. Hands down the best views on the trip came not from the stereotypical and touristy needle, but from building 2101 Third. A friend and I received a private tour after he met the building engineer by chance the day before at a dive bar. Go figure, right? This awesome guy named Mario, in his sixties I’d guess, had endless stories. I could’ve easily sat and listened to him speak about his life all day. He was that kind of storyteller. Long story short, no pun intended, he took us all the way to the top, and though slightly terrifying, the views were insane!

I couldn’t leave without visiting the Pop Culture Museum, which did not fall short of my expectations. The architecture of the building alone was fun and quirky, only providing a preview of what the inside held. Each room was artistically designed and brought visitors through a tour of pop culture history, the history of body art, which was my personal favorite exhibit, and through an interactive maze of horror, featuring original costumes and behind the scenes look into the most popular horror films.